Today's team has missed the playoffs in just seven of their 28 seasons to date. Here's the all-time roster for the San Jose Sharks:

Left Wing - Patrick Marleau The second overall pick in 1997 (after the next player on this line) Patrick Marleau is still active and playing in his 21st season with the Sharks. San Jose's all-time leader in games played could soon move into third place on the NHL's all-time list and has a chance of breaking Gordie Howe's league record by the end of the season. Marleau is the Sharks' standard-bearer in goals, points, and point shares.

Center - Joe Thornton Currently a Toronto Maple Leaf, Joe Thortnon was selected #1 overall by Boston in 1997. The NHL's second-oldest active player, "Jumbo" was traded to San Jose during his MVP season of 2005-06. He's second to Marleau on San Jose's all-time list in games played and points, and his 804 assists are tops in team history. Thornton ranks 14th in NHL history with 1,511 points (and counting) yet he was not named one of the NHL's 100 Greatest Players in 2017.
Right Wing - Owen Nolan A five-time All-Star, Owen Nolan was selected by Quebec with the first overall pick in 1990. Acquired for Sandis Ozolinsh early in the 1995-96 season, Nolan played 568 games and registered 451 points for San Jose. His 0.79 points per game average is tied for third in Sharks history and he's tied for second with 14 short-handed goals. Only four Sharks scored more goals than Owen, and only Jeff Odgers served more penalty minutes.

Left Wing - Vincent Damphousse A Stanley Cup champion and three-time 90-point scorer in Montreal, Vincent Damphousse played the final 385 games of his career with the Sharks after a 1999 trade. The three-time All-Star is 48th all-time with 1,205 career points - just a handful ahead of Marleau - and ranks tenth on the Sharks' all-time list in assists (197) and points (289). His 0.51 assists per game average ranks fifth in franchise annals.

Center - Logan Couture San Jose's current captain, Logan Couture has spent his entire career with the team that drafted him ninth overall in 2007. The third-leading goal scorer and fourth-leading point scorer in franchise history led all playoff scorers with 30 points in 2016 - the highest total in a single postseason since 2010. Three years later Couture led the league in postseason goals with 14, despite the Sharks losing in the Western Conference final.

Right Wing - Joe Pavelski Currently a Dallas Star, Joe Pavelski is second in Sharks history with 355 goals and ranks third with 406 assists and 761 points. Only a lockout-shortened season in 2012-13 prevented Pavelski from posting nine consecutive 60-point seasons. A two-time Stanley Cup finalist, Joe led all postseason scorers in even strength goals in 2016 and 2020. Every one of the Sharks' top six forwards - except Nolan - is a natural center, so I had to get creative here to balance the lines.

Left Wing - Jeff Friesen San Jose's 1st round pick in the 1994 draft, Jeff Friesen ranks seventh in Sharks' annals with 350 points, eighth in goals with 149, eighth in offensive point shares with 26.6, and tied for eighth in assists with 201. His 13 short-handed goals are the fourth-highest total in team history. Friesen won a Stanley Cup with the Devils in 2003.

Center - Tomas Hertl Another talented center in San Jose's stable, Tomas Hertl set career highs with 35 goals and 74 points in 2018-19. The Sharks' first round pick in 2012 cracks the team's top ten in goals, game-winning goals, and offensive point shares. His 100 even-strength markers are tied for seventh with the next player on this line.

Right Wing - Jonathan Cheechoo The 2006 "Rocket" Richard trophy winner, Jonathan Cheechoo set the Sharks' single-season record with his league-leading 56 goals. He led the NHL in goals per game and even strength markers that season, while recording five of his franchise-leading nine hat tricks. More than a one-year wonder, Cheechoo ranks fifth in Sharks' annals with 36 game-winning tallies and sits sixth on San Jose's all-time list with 62 power play goals and 165 total goals.

Left Wing - Marco Sturm One of three players shipped to Boston in the Joe Thornton trade, Marco Sturm is tenth in Sharks' history with 128 goals and 82 even strength goals. The German forward is tied with Cheechoo for eighth among Sharks in plus/minus rating and only Patrick Marleau has scored more short-handed goals for the franchise than the 21st overall pick in 1996.

Center - Mike Ricci A gritty defensive forward over the bulk of his 16-year career, Mike Ricci was a Selke finalist in San Jose and a Stanley Cup champion in Colorado. The six-time 20-goal scorer is tenth in Sharks' annals with 38 power play goals and his 101 total goals leaves him tied for 11th in team history with the next player on this line.

Right Wing - Ryane Clowe A bruising power forward when healthy, Ryane Clowe posted over 50 points in three of his four full seasons with the team. He ranks fifth in Sharks history with 567 penalty minutes, 11th among San Jose forwards with 271 points, and 11th among all Sharks with 73 even-strength goals.

Spares - Milan Michalek, Devin Setoguchi
Michalek played 95 more games for Ottawa but score just ten more points as a Senator than he did as a Shark. The sixth overall pick in 2003 ranks 13th among Sharks forwards with 214 points and sixth among all Sharks with a +49 rating. Setoguchi played just 267 games for the Sharks in the minimum four seasons; his 84 goals rank 14th among Shark forwards. I don't often consider players with less than 300 games played for an All-Time Team but Fuji's favorite player produced more value than Pat Falloon or Timo Meier - who managed just a couple more points than Setoguchi.

A three-time finalist for the Norris trophy, Brent Burns won the award in 2017 after scoring a career-high 29 goals on a league-leading 320 shots. The six-time All-Star is fourth in Sharks history with 358 assists and his 515 points are the team's fifth-highest total. Vlasic leads the franchise in defensive point shares and only Joe Thornton has a higher plus/minus rating. The 15-year veteran has played the third-most games in San Jose history and posted the eighth-most points among Sharks.

Brad Stuart - Mike Rathje
Stuart ranks tenth in Sharks history in defensive point shares and plus/minus. The third overall pick in the 1998 draft earned the most offensive point shares of the remaining Sharks defensmen and his 170 points are the 17th-highest total in team history. Rathje, the third overall pick in 1992, suited up for San Jose 671 times - the sixth-most in team history. Only Burns and Vlasic have provided more defensive value for the Sharks than Rathje did over his eleven seasons in teal. Dan Boyle was strongly considered here, but his services were needed more on tomorrow's All-Time team.

Shot-blocking specialist Scott Hannan ranks fourth among Sharks blueliners in defensive point shares with 32.2. The stay-at-home defender's +43 rating ranks seventh among all San Jose skaters. Braun brought his talent for shot blocking and body checking to Philadelphia in 2019. He ranks fifth among defenseman on the franchise's games played and defensive point shares lists.

In five seasons with the Sharks Christian Ehrhoff scored just 25 goals - ten of them coming in the 2006-07 season. However the German born blueliner ranks eighth among Sharks defensemen with 132 total points and his 0.39 points per game is bested by just two other San Jose players at his position.

Nabokov leads the Sharks in wins, shutouts, and games played by a goalie. The 2000-01 Calder trophy winner led the NHL with 46 wins (in 77 games) in 2007-08, finishing a close second to Martin Brodeur in Vezina voting. Niemi succeeded Nabokov in the Sharks' net after winning a Stanley Cup with Chicago in 2010. The franchise leader in save percentage is second to Nabokov in wins, shutouts, and minutes played. 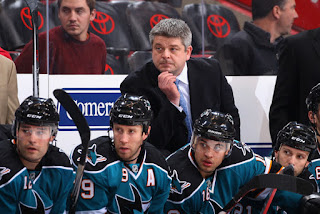 Todd McLellan's 311 victories are 105 more than any other coach in Sharks history. The team's career leader in winning percentage directed San Jose to postseason play in six of his seven seasons with the team. Owen Nolan and Patrick Marleau served as Sharks' captains for five seasons each, and Marleau shared duties in his first season with the 'C'. I'll use service time as a tie-breaker here.

I hope you'll join us tomorrow for our next All-Time Team, the Tampa Bay Lightning.